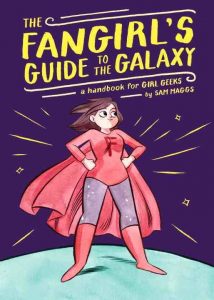 In The Fangirl’s Guide to the Galaxy, Sam Maggs describes seven prominent “kingdoms” of the Internet: Twitter, Facebook, Reddit, and so on. Each of these realms is a locus for fandom, with its own “currency”—the thing that is valued or exchanged—as well its own rules and mores.

Fan communities cluster around more than just these seven kingdoms. And if we expand “fan” to mean any community organized around shared passions or pursuits, there are even more kingdoms to consider. What online spaces are missing from Maggs’ list? YouTube is a surprising absence. Wattpad, Archive of Our Own, or other fanfic sites are other striking absences. What about wiki communities, if not Wikipedia itself? A case could be made for Discord or Twitch. Or cam sites. Even spaces on the dark web.

Magg’s list seems to be an implicit invitation to think about other online spaces as distinct realms where fans of all identities can geek out about what they love. That’s what this assignment is all about. It is divided into three parts: (1) an analysis of Maggs’ kingdoms, (2) your own contribution to the idea of fan kingdoms, and (3) a synthesis of your findings.

Carefully reread Maggs’ guide to “The Seven Kingdoms of the Internet.” Zooming out from the specific details she offers of individual Internet spaces, what sort of broad patterns emerge? In what ways does Maggs idealize the Internet? In what ways is she pragmatic? What assumptions does she make about fangirls and fandom? What sort of absences structure her argument?

Consider these and other questions as you analyze “The Seven Kingdoms of the Internet.” (750 words)

Borrowing the voice and style of Maggs, identify and describe a new “kingdom” of the Internet. Your kingdom should have the following components:

The best projects will do the following:

Office Hours: Tuesday and Wednesday, 1:30-2:30pm, and by appointment